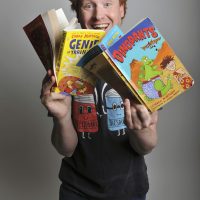 The Fincredible Diary of Fin Spencer

Genie in a Trap