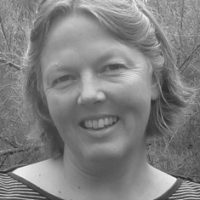 Born in Chobham, by an airfield, and raised in Winchester on the banks of the river Itchen, Fleur Hitchcock grew up as the youngest child of three. When she was eight, she wrote a story about an alien and a jelly. It was called THE ALIEN AND THE JELLY and filled four exercise books. She grew up a little, went away to school near Farnham, studied English in Wales, and, for the next twenty years, sold Applied Art in the city of Bath. When her younger child was seven, she embarked on the Writing for Young People MA at Bath Spa and graduated with a distinction. Now living outside Bath, between parenting and writing, Fleur Hitchcock works with her husband, a toy-maker, looks after other people's gardens and grows vegetables.

Fleur's debut novel SHRUNK! was THE SUNDAY TIMES 'Book of the Week', and you can follow her at: fleurhitchcock.wordpress.com or on Twitter: @fleurhitchcock

Mayhem and Meteorites: A SHRUNK! Adventure

Ghosts on Board: A SHRUNK! Adventure