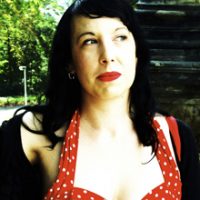 Joanne Owen was born in Pembrokeshire, Wales, and read Social and Political Sciences with Archaeology and Anthropology at St John's College, Cambridge. Now living in North London, Joanne has published two previous Young Adult novels. Steeped in the atmosphere of nineteenth century Prague, PUPPET MASTER blends the magic of marionette theatre with Czech folklore and legends. Described by The Guardian as 'timeless', PUPPET MASTER was longlisted for the Carnegie Medal and Branford Boase award and has been translated into several languages.

Her second novel, THE ALCHEMIST AND THE ANGELS is a fantastical, historical epic set in sixteenth century Prague, among the plague-ridden ghettos and decadent court of mad Emperor Rudolf. It wasdescribed by School Librarian as 'An imaginative tour de force'. Follow Joanne on Facebook at www.facebook.com/JoanneOwenBooks or on Twitter: @JoanneOwen

Martha Mayhem and the Barmy Birthday

Martha Mayhem and the Witch from the Ditch