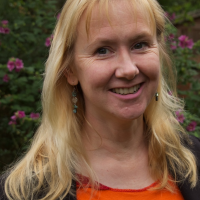 Although Julia Wills was born in the last century this absolutely does not make her as old as the Ancient Greeks she tells stories about. However, she does admit to writing for just about as long as she's been able to hold a pen. As a child she lived in the north of England, in Stockport, a town famous for its enormous Victorian viaduct made of 11 million bricks. The artist L S Lowry was very fond of painting it, although it did take up most of his paint, which meant that he had to make his cats and dogs very thin.

After studying Psychology at Oxford University, Julia completed a PGCE at Northampton and a Masters in Writing at Glamorgan (now the New University of South Wales). She has always written but has had lots of other jobs too, such as maintaining a photo library for a Texan oil company, tasting sausages, working for batty professors at Oxford and teaching Year Four children in Northamptonshire. It was here, in the classroom, as Miss Wills, that she discovered just how much children love the Ancient Greeks, their fabulous monsters and glitzy heroes, and more importantly, how children love a good laugh when they read.

Julia lives in Warwickshire with her partner, Jim, and their dog, Bosworth, who is half-poodle, half-spaniel and all cuddles. Find Julia on Facebook: JuliaWillsAuthor or on Twitter: JWillsauthor